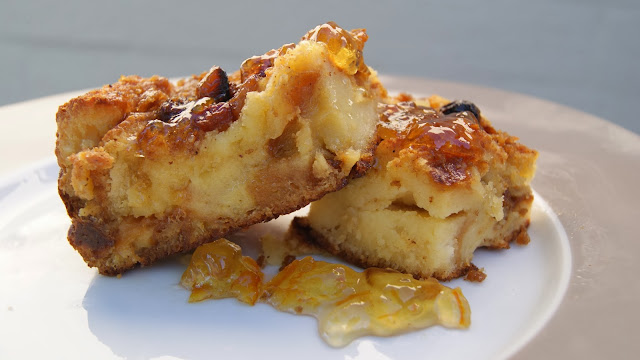 Method
Lightly butter a 2ltr baking dish. Then, butter the slices of challah on each side and layer half the slices onto tray so the tray is fully covered. Sprinkle sultanas over this layer of bread.

In a bowl, whisk eggs and sugar together until mixture turns pale. Set aside.

In a heavy based pot over medium heat, pour in milk and cream plus vanilla essence and cardamom. Bring mixture to just before boiling point and then turn down to a low heat. Let simmer for 5-8mins. Then, taking out the cardamom pour mixture over the egg mixture in other bowl. Whisk lightly to combine.

Pour half the mixture over the bread in the tray. Then, press bread down with your hands so it absorbs the mixture. Place remaining slices of bread on tray, layering to cover bottom layer. Pour remaining mixture over bread and repeat previous step of allowing bread to soak up mixture.

Remove from oven and let cool.

For butterscotch topping, pour brown sugar into pot over a medium-high heat with a teaspoon of water. Once sugar starts to caramelise, add butter and let melt into sugar. Stir to combine for about 2 minutes. Then, pour hot mixture over pudding. Let cool for 30mins.

Serve with orange marmalade if desired. 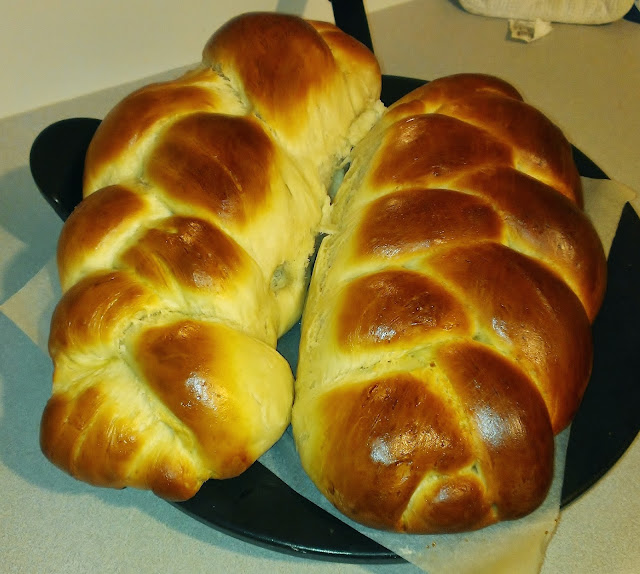 Method
Combine yeast, warm water and tablespoon of sugar in a warmed bowl. Let sit for about 10 mins, when mixture will be foamy.

Add the rest of the sugar, salt and 3.5 cups of the flour. Mix well.

Add egg and oil and mix until combined. Then start to mix in the remaining 3.5 cups of flour. When the mixture pulls away from the side of the bowl, place onto floured bench. Kneed for 10mins until dough is elastic. Then, place dough in an oiled bowl turning the dough so it is covered with oil. Cover loosely with plastic wrap and place in a warm area (turn on oven for about 30sec - 1min. Turn off and place bowl with dough in it). Leave for 2 hours to rise, but punch dough down every 30 mins).

Cut dough into 2. These will make the 2 challot. With each half, divide into 3 pieces and then roll out into snakes. Braid the three lengths into a loaf. Repeat for the 2nd loaf.

Cover the loaves for 30mins with a tea towel or plastic wrap and let rise again.

Brush egg wash over each loaf and place onto pizza stone of baking tray with baking paper. Then, place in oven for 25mins. Afterwards, turn off oven and leave loaves for another 5-10mins before taking out.

I've decided to start blogging about the food I cook. Apologies.